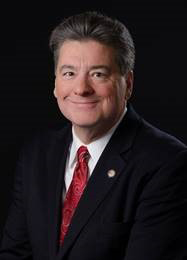 A lifelong resident of Cuyahoga County, Representative Tom Patton grew up as one of nine kids on the near west side of Cleveland. The son of a Cleveland police officer and the father of a Cleveland Heights police officer who tragically died in the line of duty, Representative Patton has taken up many legislative initiatives pertaining to police, firefighters, and first responders. Previously serving as a state representative and then as a state senator, he returned to the Ohio House in 2016 to serve the 7th House District as the Majority Whip and in 2019 began his second consecutive term. Though his legislative responsibilities in Columbus have grown over the years, for Representative Patton, community and family come first.

Representative Patton served in the Senate since 2008, and for the 131st General Assembly, Patton was selected to serve as the Majority Floor Leader. He served as the Vice Chairman of the Senate Transportation, Commerce and Labor Committee, and was a member of multiple other committees including Finance.  In addition to his standing committees, Representative Patton also served as co-chair of the Ohio Senate Autism Caucus, and as a member of the Ohio Athletic Commission, the ODOT Transportation Futures Steering Committee, the Ohio Turnpike Commission, and the Legislative Service Commission.

In his effort to attract and retain good jobs in the Cleveland area, Representative Patton has worked to expand access to higher education, invest in high-tech research and development, and lower taxes. He has supported income tax cuts for Ohioans and small business tax cuts, measures that have been included in the state's biennial budget.

With Cleveland’s economy in mind, Representative Patton was a champion for enacting a film tax credit to ensure Northeast Ohio can be competitive with other states in attracting the $60 billion film industry and the jobs that come with it. Working with local officials, Patton was also the primary sponsor of the bill that authorized use of a “land bank” as a new tool to help counties contend with the foreclosure crisis and curb urban blight.

Patton is an active member of St. Colman’s parish and serves as chair of the church’s finance committee.  He serves on the Incarnate Word Academy and Holy Name High School endowment boards, is a Cleveland Police Historical Society trustee, and has been a longstanding Strongsville Chamber of Commerce member.

A widower, he raised his family of five daughters and one son in Strongsville and has been blessed with ten grandchildren. The 7th House District encompasses portions of Cuyahoga County and includes his hometown of Strongsville.